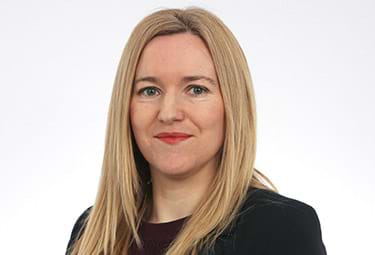 Estelle is a solicitor at Thompsons' Nottingham office where she works within the medical negligence team, dealing with cases from across the East Midlands.

Estelle has 17 years of experience dealing with both personal injury and medical negligence claims, but she has specialised in the latter.

Her cases include high-value claims involving life changing injuries for those who have suffered from spinal injuries, orthopedic injuries, amputations, surgical errors, brain injuries, fatalities, and delayed diagnoses of cancer. She also has experience of dealing with group actions arising from negligent surgery and the misuse of medical devices.

The most rewarding aspect of Estelle’s job at Thompsons is being able to carefully and skillfully support the injured at a difficult time in their lives and obtaining compensation which will ensure they have the support they need for the future.

Estelle enjoys that Thompsons is committed to working exclusively for the injured, and campaigns for changes in the law that benefit those that need it most.

I am delighted that Thompsons represented me, the final outcome was beyond my expectation and I would have no hesitation in recommending Thompsons in the future. Ms Estelle Cockayne was wonderful throughout, she gave me confidence during the process by keeping me fully informed at every stage and I always felt reassured that my case was safe in her hands. I know that she worked really hard for me and she did a marvellous job. I appreciated the professional care and support which I received and would like to say an enormous thank you to everyone involved, especially Estelle - thank you

Just a note to say thank you so much to you and your team for all your hard work and reassurance with my claim that is now concluded. As I never expected a satisfactory result, I was most pleasantly surprised to receive a cheque. If I have cause to see a solicitor in the future I would most certainly come to Thompsons.