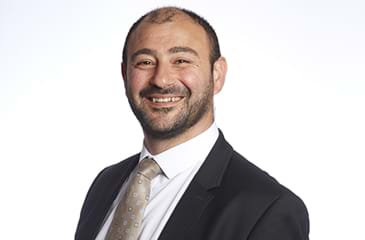 A highly experienced solicitor, Tony Mikhael combines his own caseload with the responsibility of supervising other lawyers at Thompsons Solicitors.

As a senior medical negligence lawyer, he is one of Thompsons' lead solicitors involved in litigation brought by women who have suffered horrendous injuries at the hands of breast surgeon Ian Paterson. Based in Thompsons’ Birmingham centre and covering the Midlands and eastern England, Tony specialises in cases involving the misdiagnosis of cancer or the delay in its treatment.

Previously Tony took a range of personal injury cases involving accidents at work and on the road or caused by violence. His clients were the victims of a range of diseases and injuries both physical and psychological.

Tony’s approach to his work is very much client-centred, identifying their individual requirements and making sure those needs are properly addressed. He has a reputation in the legal world for achieving the very highest compensation possible and among clients for his determination and dedication.

Tony values Thompsons’ insistence on only representing injured people rather than employers and insurance companies. It is a commitment which makes working for Thompsons “very rewarding,” he says.

Outside working hours Tony likes to watch his children at sporting and theatrical events. He also enjoys cycling and exercising.

With Tony as one of its lead solicitors, Thompsons has helped hundreds of women win compensation after being maimed at the hands of disgraced breast surgeon Ian Paterson.

Originally Thompsons took cases on behalf of 70 women, but that total is now nearer 600 following the firm’s success in representing those who had undergone highly invasive and pointless mastectomies by Paterson. The surgeon was found to have deliberately injured patients and was jailed for 20 years. He treated thousands of women at National Health Service hospitals and private clinics in various parts of the Midlands.

Paterson case client who lost his wife: “I found Thompsons as a company to be very professional at all times. Supplied regular updates on what proved to be a very long and difficult case. I must single out one member of your team, Tony Mikhael has shown genuine sympathy and understanding to me at the worst time in my life. I will now try to move on knowing I played my part in getting the main person involved convicted.”

Paterson case client: “My initial call was as a result of the media interest in the case and Thompsons name being mentioned. From the very beginning, during my first telephone conversation, I felt reassured that my interests were being looked after even though there were a lot of question marks about whether or not anyone would be held to account. Throughout Spire’s reluctance to engage, Tony Mikhael kept me informed about what was happening. I was invited to meetings and there were regular updates, both verbal and written (letter and email). While this has been a long and protracted case, at no point did I feel that there was ‘no hope’ and I cannot recommend both him and Thompsons highly enough for their determination to see justice done and the way in which they have managed this case.”

Paterson case client: "Throughout the whole, lengthy process Tony was totally professional. He always kept me fully informed and explained some very complicated legal matters in layperson terms while answering all of my questions in a patient manner… As the Paterson case progresses I am sure that Tony's other clients can rely on his professional support through the process…"

From the family of a client who died after delays to an operation to correct peritoneal dialysis which was leaking internally: “I cannot thank Tony enough for supporting us through the last few years. Myself and my children have been anxious and unsure at times, feeling a little out of our depth, however, Tony has treated us with patience, respect and kindness throughout and we will be forever grateful. I would also like to thank the experts who were called for our case for their time and effort, again we are extremely thankful.”