Tony Hood brings more than 20 years’ experience to the role

Social justice firm, Thompsons Solicitors, has appointed a new head of asbestos strategy, who has vowed to “continue the fight for justice” for families affected by the deadly disease, as he takes up the reins of his new position.

Tony Hood, 42, who has helped secure millions of pounds in compensation for families across the North East of England, will head up the asbestos team across Thompsons’ 17 offices, following the retirement of head of asbestos litigation, Ian McFall.

Based in the firm’s Newcastle office, Mr Hood will be responsible for delivering the firm’s asbestos strategy and ensuring best practice across all of Thompsons’ asbestos cases, while working closely with trade unions, asbestos support groups and charities to ensure that the firm’s clients receive expert support and advice.

Mr Hood said: “It’s not the easiest of times to be starting a new role amid a pandemic and I’ve been particularly concerned about the impact it will be having on all those with an asbestos-related disease.

“I’m looking forward to taking on this new challenge, making sure that we are there for those affected and building upon the excellent reputation that Ian has helped establish over the last 30 years.

"It’s a real privilege to be helping people whose lives have been affected by asbestos and  what drives me and my team, day in day out, is ensuring that we continue to deliver the best possible service, even in the middle of a global health crisis.

Since completing his training contract at Thompsons Solicitors in 2001, Mr Hood has developed a reputable name across the asbestos community. Early in his career, he was the first lawyer in the UK to win a “third generation” asbestos exposure case - securing compensation for a 45-year-old woman diagnosed with the asbestos-related cancer, mesothelioma, as she had come into contact with asbestos as a child through her grandfather’s work clothes. 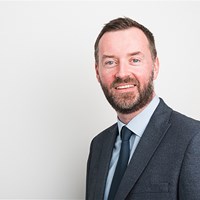 It’s a real privilege to be helping people whose lives have been affected by asbestos and what drives me and my team, day in day out, is ensuring that we continue to deliver the best possible service, even in the middle of a global health crisis.

Mr Hood added: “Ian and I have worked closely over the last 20 years. His counsel has been invaluable, and he’ll certainly be missed, but I wish him the best for his retirement.

“My career in asbestos litigation started not long after the UK banned using it. However, 20 years later, there are still on average 2,500 people dying each year from the asbestos cancer mesothelioma, not to mention those who have asbestosis, pleural thickening or pleural plaques.

“It will be a long time before we can say asbestos is truly a problem of the past and, until then, Thompsons will continue the fight for justice - for the families whose lives have been impacted by the devastating legacy asbestos has left.”

Thompsons’ head of policy, Tom Jones, commented: “For years, Ian has been at the forefront of asbestos litigation, and has been responsible for many of the successes against insurers that has TS has fought in landmark cases.

“Tony has also built up a sterling reputation in the sector, and I have every confidence he will continue Ian’s excellent work as Thompsons remains to be a leading voice in asbestos litigation.”

Asbestos was widely used in many industries, particularly in construction, ship building and manufacturing until it was banned in the UK in 1999. Inhaling asbestos dust can lead to a number of debilitating or even fatal illnesses, such as asbestosis and mesothelioma, decades after exposure.

Thompsons is one of the leading asbestos solicitors firms in the UK. As a point of principle, Thompsons Solicitors only represents workers and their families who have developed asbestos diseases and never acts for employers, defendants or insurance companies.

The firm paved the way for asbestos litigation in the UK ever since it brought about the first successful asbestos disease claim to the House of Lords in 1972. It has secured nearly £36 million in the last year alone for people who have been affected by asbestos diseases, such as asbestosis and mesothelioma. Thompsons is also one of a handful of specialist firms in the UK to be a member of the Mesothelioma UK Legal Panel in recognition of its significant expertise.

For specialist advice or to start a claim, call us on 0800 0224 0224, or email asbestos@thompsons.law.co.uk with your contact details and a member of the specialist team in your local area will be in touch.