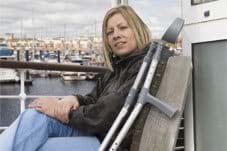 Ruth was trying to close a heavy latch on the frigate she was serving on, when something snapped in her left knee, her leg gave way and she fell.

Her leg immediately swelled and she was sent to sick bay for a week where x-rays showed that she had torn ligaments. She was put in a full leg cast and sent home.

When she got home, Ruth was still in so much pain that she visited her local hospital where she was operated on to find out the cause. The surgery confirmed that she had torn cartilage, torn ligaments and had severe ligament damage inside her knee.

Ruth had a series of four operations but also developed a condition called reactive sympathetic dystrophy, which has led to a burning painful sensation and swelling in her feet. She now can’t put weight on her feet for long periods of time.

After she was discharged from the navy, she contacted Thompsons for help.

She said: “I became very angry about what had happened to me and also about the lack of help from the navy once I was deemed unfit.

“So I contacted a firm of solicitors I had seen advertising about personal injury claims on TV. At first, they advised me that I might get £5,000. But they wrote a month or so later and said they didn’t think I had a case.

“The whole experience with Thompsons was completely different to the other solicitors. They treated me like a person. They were sympathetic and understood I was going through a bad time.

“Thompsons handled everything speedily and really well – they were always phoning and emailing me, to keep me posted. And they also understood aspects of my case particular to having been a member of the armed forces.”

“The whole experience with Thompsons was completely different to the other solicitors. They treated me like a person. They were sympathetic and understood I was going through a bad time."

Ruth our accident at work client