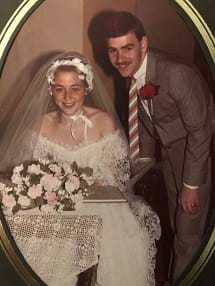 David Trimm was exposed to asbestos while at school in the 1970s. Four decades later, he developed asbestos-related cancer mesothelioma, and died aged just 53 in 2018.

During his time as a student, David ‘bunked off’ classes at Highfield Comprehensive School in Liverpool. Hiding beneath the stage at the school, he was exposed to asbestos and deadly fibres settled on his uniform from old pipework.

Other pupils would also be asked to go underneath the stage to help teachers gather equipment for school performances.

He first developed symptoms in 2011, and suffered increasingly severe and debilitating pain towards the later stages of his illness.

Mrs Trimm said: “We were devastated to learn that David’s illness started during his school days.

“His childhood hijinks had a dark side, but through no fault of his own. The school and, by extension, the city council expected children and teachers to walk through an asbestos minefield every day.

“It’s frustrating that the council continued to deny it was at fault throughout the court case, but at least with Thompsons’ help, we were able to secure the compensation to keep our family out of financial trouble now David is no longer with us.”

Louise Larkin, a senior asbestos lawyer at Thompsons, represented Mrs Trimm, said: “Asbestos continues to cause devastation and rip families apart. With the asbestos death toll still yet to peak, we should be treating the presence of this deadly material in our buildings like the ticking public health time bomb it is.”