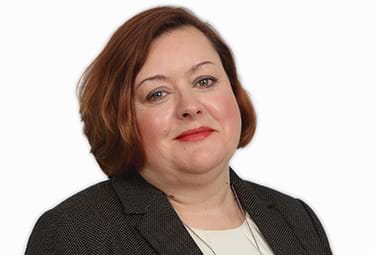 In 2016, Elizabeth Ford became manager of Thompsons Solicitors’ highly successful personal injury unit covering the Midlands. A solicitor with 15 years’ experience in the specialism, Elizabeth works at Thompsons’ Nottingham office and takes cases involving serious injury and disease, some of which are related to exposure to asbestos. Clients have often suffered multiple orthopaedic injuries, invariably where there has been a serious psychological impact.

Elizabeth’s principal role is to ensure best practice and the best possible outcome for clients. However, she also takes her own high-value accident and disease cases including those involving deaths.

Given the post of team manager in 2009, Elizabeth was put in charge of 10 Thompsons’ lawyers who were responsible for a wide range of cases involving personal injury, both in terms of complexity and value. During that time, Elizabeth continued to take her own cases where clients had contracted a disease.

Elizabeth’s next step was to develop a specialism in litigation involving fatal accidents and in 2015 she assumed managerial responsibility for the team specialising in cases involving serious injury and carrying compensation of more than £500,000. Her personal caseload at that time was dominated by litigation where the client had suffered serious injury, often where amputation had taken place. She also took cases involving industrial disease, particularly HAVS, and fatal accidents.

Elizabeth is committed to working for Thompsons because of its policy of only representing the victims of accidents or disease. Elizabeth believes she has a significant impact on the lives of clients and their families by developing a close relationship with them and winning the best possible compensation. Elizabeth is also proud of Thompsons’ record of lobbying the government to achieve improved rights for working people.

In her spare time Elizabeth enjoys singing in a choir.

Road traffic accident claim: Elizabeth acted for the elderly widow of a man who had been killed in a road traffic accident, which she had witnessed and been involved in. Elizabeth had to undertake a great deal of investigative work into the accident, the circumstances of which were disputed. The widow had sustained both physical and psychological injuries. As part of the claim, Elizabeth met the whole family in order to gain evidence about the impact of the accident. Elizabeth secured £74,500 in compensation for the widow and her late husband’s estate.

Road traffic accident claim: Elizabeth acted for Mrs Allyson Nimmo whose son was killed in a road traffic accident in which he was a passenger of a car being driven by his friend. Another passenger was also killed in the accident. The claim was taken by Mrs Nimmo on behalf of the young son of the dead man. The circumstances of the accident were very complicated because there was an issue as to whether the vehicle was insured as the time of the accident and, if so, who had the owner’s permission to drive it. As part of her in-vestigations, Elizabeth had to obtain evidence from the criminal trial of the driver including the CCTV of the events that led up to the accident. She was successful in securing an award of £30,000 in compensation for the young boy, which was approved by the court.

Mr Derek Nichol, an executor of the estate in a claim involving a fatality, said: “Elizabeth Ford handled these affairs in an excellent way and kept us informed and up to date at all times.”

Mrs Allyson Nimmo said: “During a very difficult time for myself and my family, Elizabeth Ford was extremely supportive in dealing with our case. She took us through the process from paperwork to court proceedings quickly and efficiently along with a sense of compassion that made things so much easier for us to deal with. This led to an excellent outcome. I would highly recommend Elizabeth and Thompsons Solicitors.”